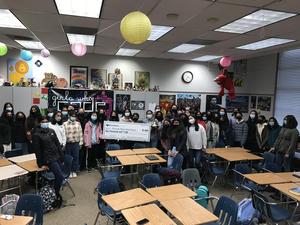 Congratulations to Amador Valley High School’s Girls Who Code (GWC) program for receiving statewide distinction as a 2021 California School Board Association (CSBA) Golden Bell Award recipient in the area of Equity and Access. The Golden Bell Awards, celebrating their 42nd year, are presented by the California School Boards Association to promote excellence in public education and school board governance by recognizing outstanding programs and governance practices. The awards reflect the depth and breadth of education programs and governance decisions supporting these programs that are necessary to address students’ needs. Amador GWC received its award at a reception and ceremony on December 2, 2021.

Amador Valley High School's Computer Science Department is led by Richard Hanson and Kevin Kiyoi. Mr. Kiyoi approached Mr. Hanson about taking the helm of the Girls Who Code Club in 2016 and the program has grown exponentially since. Part of a national organization whose “mission is to close the gender gap in technology and to change the image of what a programmer looks like and does,” Amador’s Girls who Code students and advisors have been inspiring more young women in grades 3 - 8 to pursue careers in computer science and STEM since August 2016. Amador Valley’s Girls Who Code program has expanded beyond this mission statement to offer career education, mentoring events, and volunteer opportunities to AVHS students.

Students in grades 3 - 8 who participate in Girls Who Code at Amador Valley are taught by the budding female leaders themselves. The Amador Girls Who Code have each completed higher-level computer science courses and teach less experienced members of the club how to succeed in coding. This creates a safe and supportive learning environment where girls can feel empowered and gain confidence in a non-threatening setting. Although the Girls Who Code program does an excellent job of supporting girls once they get to high school, most girls lose interest in computer science by the age of 13. To address the loss in the number of girls seeking careers in programming, the Amador Valley Girls Who Code Summit was created.

“I knew I was interested in coding early on because my dad was a software engineer. I created motion sensors with my dad using coding that turned on sprinklers whenever dogs or other unwanted animals walk onto the lawn,” remembered Amador Senior and Girls Who Code President Anusha Maheshwari. “When I was a Freshman [at Amador] I couldn’t believe there weren’t more girls who are interested in computer science, which helped lead me to Mr. Kiyoi and the Girls Who Code club. This program has supported the school in raising female enrollment in computer science and STEM courses.”

In March 2020, the Amador student chapter of Girls Who Code held its first annual one-day Girls Who Code Summit. The intent of the Summit was to introduce girls to aspects of problem solving, application design, and software development in an inclusive team scenario. Over 90 Pleasanton elementary and middle school girls (grades 3 - 8) participated in this inaugural event. Participants were partnered with high school student mentors and female industry professionals to learn the “Art of Coding.” The day began with a keynote address from Dr. Crystal Bray, the Director of Rider Engagement and Product Analytics at Uber, who spoke about the necessity of recruiting more women into careers in programming. Participants were broken into teams of two or three based on their grade level and assigned a high school mentor and a volunteer industry professional (female programmers, software engineers, and database analysts) to help guide their journey for the day.

The programming platform for the Summit was Android App Inventor. High School Mentors taught the students how to build apps, using paired programming practices and principles. Students were able to test their projects on an Android Tablet in order to problem-solve design and coding flaws. The capstone project for the event was to determine a social issue that needed to be addressed and then to design, develop, and create an app that addressed this social need. Examples of projects included apps that could help someone find a local shelter for adopting a rescue animal and informative quizzes that taught the user facts about global warming.

In the Spring of 2021, the second Girls Who Code Summit reached new heights. Faced with the restrictions of social distancing and COVID, it was not possible to present the summit in person. With the support of the Pleasanton Unified School District we were given the tools and support to be able to host a virtual event via Zoom and Zoom Webinar. This summit hosted over 130 girls, not only from Pleasanton, but from the San Jose and Tri-Valley communities, as well as students from the East Coast. The keynote speaker for this event was Chloe Condon, a Bay Area based Cloud Advocate for Microsoft, who inspired the group by talking about taking non-traditional routes to find a career in coding. Using Zoom and Repl.it (a web-based Integrated Development Environment), students and mentors worked in groups to learn how to build web pages using HTML, CSS, and JavaScript. Using breakout rooms and again working in teams of two or three, the capstone project for this summit was the creation of a web page that highlighted and supported one of the 17 Sustainable Development Goals developed by the United Nations. Outstanding examples for this summit addressed statistics of childhood hunger, the need for clean water and sanitation, and the need for equity in education.

A pillar of the Pleasanton Unified School District’s Vision Statement is that “All students, regardless of race, ethnicity, socio-economic status, or gender will be proficient/advanced and college/career ready upon graduation.” For the 2019 and 2020 academic years, Amador Valley has earned the College Board AP Computer Science Female Diversity Award for expanding young women's access to AP Computer Science Principles (CSP). Schools receiving this Female Diversity Award have achieved either 50% or higher female exam taker representation in an AP computer science course, or a percentage of female computer science exam takers that meets or exceeds that of the school’s female population. Despite this success, only 27% of the students currently enrolled in computer science courses at Amador are female. The Girls Who Code Summit addresses this inequity and creates a long-term solution to change this statistic.

As shown by the successful completion of both a live and virtual event over the past two years, the Girls Who Code Summit is a sustainable project, fueled by the passion of students to increase the number of women in the computer science industry. All of the programming software is open source and the equipment used (Android tablets, Zoom Webinar License) was provided by the District. By creatively finding new and innovative ways to teach programming through different coding languages and environments, students will be able to attend a new summit where they will learn different skills, up to six different times (grades 3 - 8) over the years.

Mr. Kiyoi remains humble yet an enormous presence for Amador computer science students and Girls Who Code club members. “We believe the Summit is a very unique project that can be easily blueprinted and replicated across the Country.  We’re moving in the right direction, but we can do better,” said Kiyoi.

“We will do better!” Anusha responded.