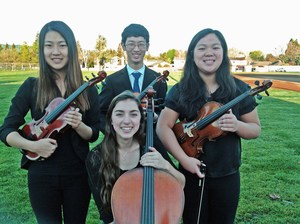 PLEASANTON, CA (04/10/2015) When the touring show "In My Life - A Musical Theatre Tribute to the Beatles" comes to the Bankhead Theatre on May 18, be on the lookout for two quartets -- not just one.

The Amador Valley (Pleasanton) High School string quartet has the privilege of joining the professional actors on stage to add an element of orchestral texture to the evening.

The show: "In My Life" is the musical retelling of the Beatles story through the eyes of manager Brian Epstein and featuring the live music of renowned tribute band Abbey Road. The band features Chris Paul Overall ("Paul"), Nathaniel Bott ("John"), Jesse Wilder ("George") and Axel Clarke ("Ringo"). Brian Epstein is played by Murphy Martin. The production includes multimedia, period costumes and vintage instruments. It has toured for years, with a critic for the Orange County Register at one point declaring, "If you see one tribute show, see this one --smart and loads of fun." The show is widely considered by industry insiders to be the most unique Beatles show in decades.

The string quartet: Amador senior Cynthia Tien, juniors Joseph Mo and Hannah Scarborough and sophomore Diane Jo will join the band for the songs "Eleanor Rigby," "Yesterday," "A Day in the Life," "Hello Goodbye," and "Hey Jude." In a special touch, "Yesterday" is played as a scene in which the Paul McCartney character plays the song for the first time for Beatles producer George Martin, with the songwriter explaining that he envisioned a string-quartet accompaniment.

In addition to playing with the Amador Valley High Orchestra, members of the quartet belong to prestigious area youth ensembles, including the San Francisco Symphony Youth Orchestra, the Oakland Youth Orchestra and the Livermore Pleasanton Youth Symphony Orchestra.

Amador Valley's other music achievements:  The Amador Valley High School Music Department has been recognized as one of the top music programs in California.  The department has more than 500 students enrolled in orchestras, choirs, and marching, concert and jazz bands.  In 2014 the Wind Ensemble performed at the Midwest National Conference in Chicago and the Orchestra played at the California All-State Convention. Amador groups have consistently scored unanimous superior ratings at California Music Education Association festivals and have performed across the U.S. and several other countries. Their website is at www.amadormusic.org

How the "Beatles" connection was started: The producers of "In My Life" approached AVHS Orchestra Director Mark Aubel looking for a talented ensemble which could hold their own with a rock band in front of an audience. The show commonly uses a local quartet to augment the production while on tour.

"I adore the Beatles because they wrote substantial cello parts for many songs and their music is timeless and so versatile," said Scarborough.

Mo's favorite Beatles song is "Hey Jude." "I'm excited we get to perform the song for this show," said Mo.

PHOTO TAG: "Quartet photo" shows Hannah Scarborough in front with the cello.  In the back from left to right is Diane Jo, Joseph Mo, and Cynthia Tien. Photo taken by Mark Aubel.