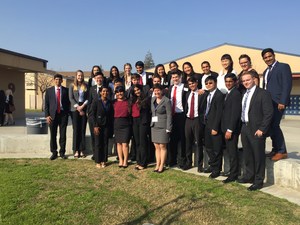 
As the first place team, Amador Valley High School earns a spot at the National Competition. On Friday, February 9, Foothill High School’s competitive civics team was announced as the ‘wild card’ selection, also earning a spot to compete at Nationals.


We the People is a competitive civics program sponsored by the Center for Civic Education. Students’ knowledge of the Constitution, the founding of our country, and the evolution of American government is tested in simulated congressional hearings that foster critical thinking and creativity.


Amador and Foothill teams’ impressive finish was a culmination of thousands of hours of preparation and rehearsal from student team members and teachers.


"The team worked extraordinarily hard this year and did an excellent job in the face of some very tough competition. California has a relatively strong program, so to earn a spot a Nationals is truly an accomplishment," said Amador Valley competitive civics coach Stacey Sklar.


“This is a tremendous group of students who have given their all since day one. I'm proud of all they have accomplished and feel very lucky to have gone on this journey with them,” said Detamore. “They've set a high bar for future Foothill We the People classes to meet.”


The Pleasanton Unified School District congratulates both Amador Valley and Foothill High School teams on their incredible efforts and earning spots at Nationals.


“We are extremely proud of our Amador and Foothill student competitors,” said Superintendent David Haglund. “It almost goes without saying that to have our high school teams take both the first and second place prizes in the State competition is a testament to the hours of preparation put in by our awesome students and the dedication of their amazing teachers.”