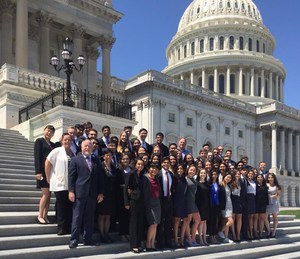 Congratulations to our Amador Valley and Foothill High School competitive civics teams on a historic year at the National We the People Finals!

Congratulations to our Amador Valley and Foothill High School competitive civics team who finished among the top four teams in the National ‘We the People’ competition held in Washington D.C. on April 27-May 1, 2018! Amador Valley placed 4th and Foothill came in 2nd place as the national runner up out of 52 teams and over 1,100 high school students from across the United States. Pleasanton was the only school district to have two teams place in the top five.


We the People is a national educational program which promotes civic competence and responsibility. Students demonstrate their understanding of government and the Constitution by participating in congressional hearings.


In a historic year, both Amador Valley and Foothill teams from Pleasanton advanced to Nationals after Amador placed first and Foothill second, with a difference of just four points, during the California We the People Competition held in February 2018.


The Amador and Foothill teams’ historic finish was a culmination of thousands of hours of preparation by the students, teacher coaches (Foothill led by Jeremy Detamore and Amador led by Stacey Sklar), as well as parent and competitive civics alumni.


“Our students were amazing during their hearings and their hard work was evidenced in how they spoke to complex issues in front of the panels of legal scholars, judges and attorneys,” said Superintendent David Haglund. “Thank you to our dedicated teachers, Jeremy Detamore and Stacey Sklar, who dedicated countless hours as coaches to the teams, and to the families and community who supported these students on their journey.”


Foothill has excelled in recent years, advancing to Nationals for the first time in the 2015-2016 school year.


“It is a true honor to have worked with this remarkable group of students. While I am overjoyed about our success, I’m sad that it means that our time working together is coming to an end,” said Foothill competitive civics coach Jeremy Detamore.


Amador has advanced to Nationals 16 times, and finished among the top 10 teams 13 times. In 1995, Amador was the National Champions.


“The fact that both Amador and Foothill placed so well really says something about the quality of civics education in Pleasanton,” said Amador competitive civics coach Stacey Sklar. “The Amador team gave a nearly flawless performance, especially in the final round. I can assure you that both schools intend to continue to give other top teams a run for their money in future years!”


The Pleasanton Unified School District congratulates all of our We the People student competitors.