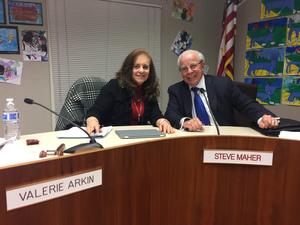 During their December 11 Organizational/Regular meeting, the Board of Trustees appointed Valerie Arkin as the 2019 PUSD Board President and Steve Maher as Vice President.

Valerie Arkin has served as a PUSD Trustee since 2008 and is currently serving her 4th term after being re-elected in 2016. President Arkin serves as a representative on a number of Board appointed committees including Regional Occupational Program (ROP) Joint Powers Board, Alameda County School Board Association, TEC (Tri-Valley Education Coalition) as well as serving as an alternate on the City of Pleasanton Economic Vitality Committee, City of Pleasanton Liaison Committee, Tri-Valley Special Education Local Plan Area, PUSD Board Policy Subcommittee.

Steve Maher has served as a PUSD Trustee since being elected in November 2016 and is currently serving his first term. Vice President Maher serves on a number of Board appointed committees including the City of Pleasanton Liaison Committee, PUSD Audit Committee, Alameda County School Board Association, Tri-Valley Education Coalition and PUSD Board Facility Subcommittee.

Trustees Mark Miller and Joan Laursen were also sworn in by Superintendent David Haglund to officially begin their 2018 - 2022 school board terms following the November 2018 general election.

The District expresses its sincere gratitude to Mark Miller for his service as Board President this past year.

“I would like to thank Trustee Mark Miller for his leadership this past year as our Board President. Your guidance and dedication have had an immeasurable impact in moving our District forward to best serve our students and community,” expressed Superintendent David Haglund during the December 11, 2018 Board Meeting. “Our students, staff and community have benefitted from your steady guidance and selfless service.”