Pursuant to California Education Code (EC) Section 52855 and EC 64001 a schoolsite council (SSC) is to develop, annually review and updates the Single Plan for Student Achievement (SPSA). The SSC must recommend the SPSA to the local governing board for approval. Thus the role of the SSC is crucial to the success of the categorical programs a school may have.

The means of selecting SSC members is not specified in law, except that members must be chosen by their peers (ECSection 52852). No additional membership qualifications may be required. Beyond the composition requirements stated above, no member position on the SSC may be reserved for any group or individual. SSC membership may be determined by ballot or may be decided in an open meeting by voice vote.

To broaden the support for the SSC membership selection process, and to avoid controversy over the selection of SSC members, board policy, or SSC bylaws may specify:

Many schools elect members for a two-year term, with elections for half the members held in even years and half in odd years. This practice ensures that the SSC will not be composed entirely of new members each year. Some schools assure additional continuity by electing non-voting alternate members, who are seated as voting members by the SSC in the event of a midterm vacancy on the school site council.

In order to conduct business effectively, the SSC may include officers with stated responsibilities and authority, including:

At the first meeting of the School Site Council, members receive training and guidance in their roles and responsibilities.  Throughout the year they review pertinent school data and discuss programs in place to support the school mission and vision.  The following documents can be used in these efforts.
In addition, each school site has been provided with a copy of School Site Council, Forging Partnership in the Era of Local Control.  This book is a comprehensive guide for school and district administrators for establishing and managing an effective SSC. 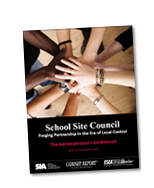